Turn Order and Faction:
Due to the speedy Game 2 (about 45 minutes), the commanders immediately regrouped to play again. This time, there was no high die roll for Jeremy. In fact, he went last after Mark won the roll off.

The faction selection went almost the same as last time, but the outcome of the game was anything but. Mark picked first and opted for Imperial Balkania, having seen Ben and Jeremy use it to great effect in their victories in the first two games. He also chose to further emulate the other two, and placed his HQ in Western Australia.

Trent reacquainted himself with Khan Industries and decided he’d give Africa a try. The grey army gathered in East Africa.

Nathan chose the third most popular Saharan Republic and founded a base in Alberta.

Ben then made a key move that basically scuppered Mark’s plans to use the expand-to-four-or-more-territories tactic, by placing the fortified HQ of Die Mechaniker in Southeast Asia. This would make it very difficult for Mark to move out of Halitosia; however that turned out to be the least of Mark’s problems.

Finally with the vast open expanse of Europe and Asia beckoning, Jeremy chose to place the Enclave of the Bear HQ in Great Britain.

Mark had the first opportunity to expand the territories of the purple army, but with Ben threatening him from Southeast Asia, he decided to only claim New Guinea and Indonesia. Claiming Eastern Australia would have been beneficial, but with the Major City of Bento located there, Mark did not want to lose the two troops just yet. 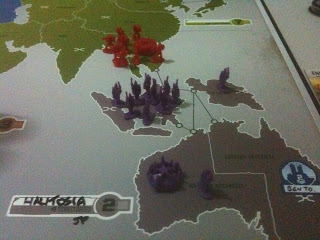 The next four turns saw all four players take control of a continent. Trent claimed all of Africa, then Nathan claimed all of North America, spreading himself thin, but only threatened by Jeremy in Great Britain.

Ben then made his move. He brought the full might of the red army’s 10 attacking units against the 9 purple defenders in Indonesia...and won. Easily. Ben completed dominated the battle, allowing him to take the rest of Halitosia including Eastern Australia. For the second straight game, Mark’s forces had been wiped out by Ben. 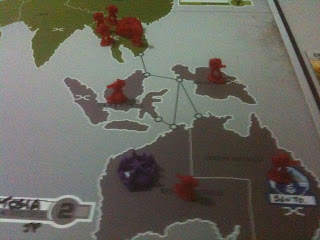 Having seen everyone else grab a continent, Jeremy, who was already one star down on everyone except Ben thought he’d get in on the action, and he claimed all of Europe. This was a strategically stupid move. He could easily have kept his main army together and knocked off the lone sand person in Greenland to stop Nathan’s 5-point continental bonus, but instead he chose to spread the green army all over Europe and make a very easy and inviting target for Khan Industries and The Saharan Republic.

It should come as no surprise, then, that that is exactly what happened. Boosted by their continental bonuses, Trent and Nathan both started heading in to Europe, with the Enclave’s HQ in Great Britain as the grand prize. Jeremy could do nothing but look on and clump together the few remaining troops he had.

Meanwhile, Mark had come back on to the board in Irkutsk and decided to lay low and not spread out, while Ben also wanted a piece of the tasty Europe pie, and came up through Afghanistan into Russia.

Trent was the first commander to lay claim to another faction’s HQ when he conquered Great Britain. Nathan immediately decided that that just wasn’t on, placed all his new troops in Iceland, and attacked southward. The die rolls were not good for the aggressor however, and after losing half of his army he pushed east into Scandinavia instead where a single Bear was ruthlessly butchered.

On his next turn, Jeremy tried to at least gain a card and take back Russia, but his demoralised troops were no match for the disciplined Die Mechaniker unit who obviously wanted the Smirnoff all to himself.

Round 3 began with Imperial Balkania eyeing off a return to their old HQ. Mark attacked into China and then marched towards the border with Southeast Asia. He paused for a moment while considering the strength of the fortified Die Mechaniker HQ, but decided to press on anyway.

It didn’t work out too well for Mark. The purple army was repelled and would have to wait for a future turn to try and reclaim Halitosia.

Trent took advantage of the extra troop for the newly acquired HQ in Great Britain, but it would only be used as defence for now as he mobilised the Khan Industries army in Egypt and attacked the Middle East. Trent’s plan was to succeed where Mark had just failed by taking Ben’s HQ and winning the game.

Unfortunately, his Egyptians proved to be piss poor fighters and went nowhere. It was then pointed out to Trent that he could also use the troops he had stationed at his HQ in East Africa to attack the Middle East. With renewed hope he gave it another try, and finally won the battle. His tired and depleted forces could do more for now, and Trent’s turn was over.

Now it was Nathan’s turn to go for the win. The ladies of The Saharan Republic first conquered Great Britain to wrest ownership of the Enclave’s HQ from Khan Industries, and then the quietly amassed Alaskan troops crossed the Bering Strait and started marching towards Southeast Asia.

For the third straight turn, Ben found himself on the defensive protecting his HQ. This time, the die rolls did not favour him, and Nathan made a winning roll to claim his third HQ and victory!

Just as Nathan’s victory cry was in full force, a missile fired by the Enclave of the Bear landed amidst his troops. Ben’s defensive roll turned into a 6 and his final unit had a reprieve.

Nathan still had a troops left, but the die rolls went against him, and the red HQ remained in the hands of Die Mechaniker. With no attackers left, and silently cursing Jeremy for ruining his moment of victory, Nathan had to call it quits.

So we played on. Ben reinforced his HQ, then Jeremy succeeded in taking Russia and finally receiving his first card of the game.

The fourth round then commenced with Mark adding troops to Siberia and taking Ural off Ben.

Having lost Great Britain last round, Trent was down to two Red Stars. He decided to take the heretofore unclaimed territories of Brazil, Argentina, and Peru and then knocked off Nathan’s troop in Venezuela to add a second continent to Khan Industries’ holdings.

Nathan then had another crack at winning the game. He placed all his recruits in Great Britain and set off on the war path again. This time, his eyes were set on Trent’s HQ in East Africa. The Saharans wasted no time in slicing through the Khanians in Western Europe and the ammo-deprived North Africa. All eyes then focussed on the battle for East Africa.

There were no missiles left to influence the battle this time and the Saharan Republic proudly marched in to claim their third HQ, and Nathan won for realz. 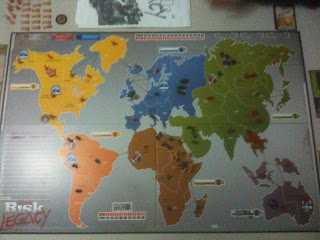 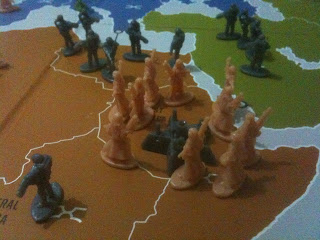 Nathan added his name to the board as the winner of Game 3 and then added the world’s second Major City when he founded New Nate City in Eastern United States.

The hangers on all founded Minor Cities. Jeremy showed what he thought of his own performance in Game 3 by building the city of Smeg Head in Russia; Trent’s contribution was Fried Rat in Central Africa; Ben added Vindaloo in India; and Mark placed the city of Gulag in Siberia.

That brought the total of Minor Cities to eight. The sealed pack that is opened when the ninth Minor City is founded is almost certain to be opened at the end of the next game. We can’t wait to see what is inside.
Posted by Jeremy at 7:58 PM

Dang looks like fun! How many hours do you think you have played in the last year?

How many hours of Risk, or of games in general? Risk: not many; other games: a lot. Overall: not enough. :-)

I have no idea on the actual figures. Let's say I average two games nights per month (I've slowed down in the last year with the arrival of my daughter) and maybe three hours of game playing per night, that's 72 hours.