Jeremy started first for the second game in a row, and having seen Ben pull off the win with Imperial Balkania last time, chose that faction. He deliberately placed his HQ in Western Australia in order to (a) claim a continent as easily as possible, and (b) ensure Ben could not place his HQ in his Major City of Bento in Eastern Australia.

Mark took Khan Industries with its one unit bonus per controlled territory with an HQ, and claimed Eastern United States.

Trent was third and chose The Saharan Republic, starting them off in Brazil.

Nathan, having played as Die Mechaniker in Game 1 decided upon a change and chose Enclave of the Bear as his faction. That was enough change for the time being though, as the familiarity of northern Asia called to Nathan, and he settled in Yakutsk.

That left Ben with Die Mechaniker, and he chose the haven of Great Britain from which to launch his empire. 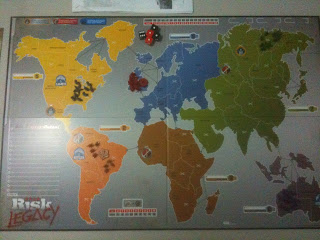 The war then began with Jeremy taking Australia (losing only two troops to the Bento resistance) and leaving the bulk of his army in Southeast Asia, allowing him to take his first card.

Not wishing to lose any troops of his own, Mark left the minor city of B.F.I. in Eastern United States alone and settled in the territories around it.

Trent also started cautiously as the desert people took control of Peru and Argentina. Perhaps the ammo shortage scar in Venezuela turned him off from taking the continent too early.

Nathan then made the boldest move of the first round. With his eyes on the prize of the 3-coin Siberia card on the sideboard, he mobilised the Enclave army and marched them from Yakutsk though Alaska and Alberta and launched an attack on Mark’s troops in Ontario. The attack was successful, and Nathan maneuvered  back to Alberta while basking in the glow of a plan well executed... Except for one small, teensy weensy flaw. He’d forgotten to claim Siberia. With no spare troops left in Yakutsk to cross the border, the Siberia card remained on the sideboard taunting him.

Ben then took the final turn of round one. The red army of Die Mechaniker claimed Southern Europe and Iceland, then moved on in to North America via Greenland. But Ben wasn’t done yet; he smelled blood. With Nathan’s Enclave having battled Mark’s Khan Industries, Ben also wanted a piece of the action, He became Ontario’s third owner for the round and then retreated to Greenland.

That was just the start of the North American conflict. After Jeremy shot north through Asia to snaffle the Siberia card, Mark reinforced his North American holdings and retook war-torn Ontario for the resource card.

Trent then tried to get in on the North American action as well, but just like in Game 1, the Saharan Republic had trouble overrunning the bunker in Central America. Trent did finally claim that territory from Mark’s Khan Industries, but not without taking significant casualties.

Nathan was up next, and decided to conquer...wait for it...Ontario! Not content with sitting there, the Enclave of the Bear upped the anti again and attacked the Khan Industries HQ in Eastern United States. The attack was successful giving Nathan his second HQ and therefore third star of the game.

The weakened Khan Industries were left with just three troops in Quebec, and keen to open the first secret envelope for eliminating a player, Ben thought he could do so by defeating Mark’s Quebecers. He did so, and took Mark’s only resource card, but unfortunately the rules state that a player is only eliminated if they have no legal starting territory to place their troops in at the start of their next turn. As there were still empty territories on the board, Mark lived to fight another day, and the envelope remained sealed, much to everyone's disappointment.

When his next turn began, Mark contemplated where his four troops would start. Despite Africa remaining relatively untouched, Mark couldn’t abandon his claim to North America, so Khan Industries started out anew in the previously unclaimed Northwest Territory and took a little revenge on the Enclave by claiming Alaska.

The blood continued to be spilled in North America as Trent attempted to take Eastern United States (and the former Khan HQ) from Nathan, but his attack was repelled.

While all this action was taking place in North America, Jeremy continued to spread across Asia and Africa unchecked, and claimed his fourth resource card of the game without having initiated a single attack.

You probably won't believe this, but Ontario then changed hands for the umpteenth time in the game, this time being reclaimed by its original occupants controlled by Mark. Mark refrained from trying to retake his HQ however.

This was a wise decision as The Saharan Republic also had their eyes on the prize, and they took over control of Eastern United States from Enclave of the Bear. This put Trent into the lead with three red stars.

Despite Nathan claiming a few northern Asian territories from Jeremy, and Ben settling the whole of Europe, nothing was going to stop Jeremy. The Purple Tide’s game plan was executed flawlessly, and the first turn of the fifth round brought Game 2 to a close. 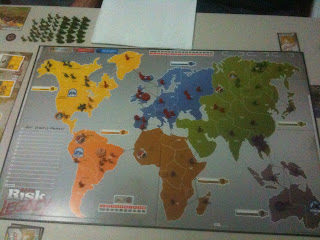 Jeremy traded in his four resource cards for a star, and then placed his seven starting troops in Japan. From there he strolled through Kamchatka into Yakutsk and claimed his fourth Red Star by conquering the three troops defending the Enclave of the Bear HQ. 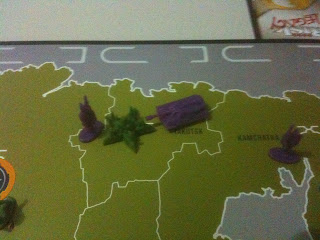 For his victor’s reward, Jeremy decided to name the former Australian continent. The continent would henceforth be known as Halitosia. The Minor Cities of Brass Monkey (Alaska) and Potville (Eastern Europe) were also founded, the Brazil card gained a third coin, and the Siberia card gained its fourth coin.
Posted by Jeremy at 7:50 PM