Well here I am back up the vacuum thingy after a lengthy hiatus with a series of session reports for Risk Legacy. Due to the nature of the game, there will be spoilers, but not for the first few games. 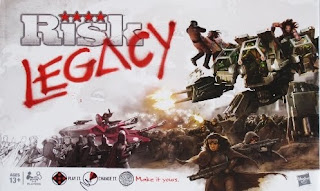 
Turn Order and Faction:
The game sat sealed on the table at Trent’s house, with the players appreciating the box and anticipating the goodness that lay within. Then the game was opened and the minimalist board was revealed, ready to be adorned with stickers and scribbles, and to play host to war.

The game was set up, the extra money allocated to twelve random territories, and each Faction received a random starting power.

The Commanders were now ready to begin. The dice were rolled, and a 6 from Jeremy gave him the honour of being the first to choose a race and a starting location. He chose the Fremen Saharan Republic who had the ability to take their manoeuvre action at any time during their turn. The eight starting units were placed with their HQ in Argentina,  a strategic choice that would hopefully allow easy capture of South America and give the versatility of expanding into North America or Africa. Jeremy would find out that things were not going to pan out quite as he had hoped.

Trent sat to Jeremy’s left and was the next to choose. He took control of the blue/grey armies of Khan Industries and ambitiously set up his base in Great Britain. Khan Industries’ power would allow Trent to place on additional troop in each territory he controlled with an HQ.

With the easily defended south eastern continent still up for grabs, Ben could not resist placing his Imperial Balkania in Eastern Australia. With the special ability of collecting a card for expanding to four or more territories, Ben sought to take an early lead in the quest to earn red stars.

Ben was followed by Mark who, whether because they were in his favourite colour of green, or because he just had a Dothraki fetish, chose the Enclave of the Bear. Mark placed his HQ in Alaska with an obvious eye to settling North America, but also allowing easy access to Asia. Mark was also hoping to benefit from the Enclave’s power that allowed instant conquest of a territory if he rolled a natural three of a kind and defeated at least one enemy troop. Unfortunately, with such low odds of rolling three of a kind (approximately 1 in 62) Mark was to be the only player who did not get to use his faction’s power during the game.

Nathan was the last in line, and faced with a choice of Die Mechaniker or Die Mechaniker, he wisely chose Die Mechaniker. With only the continents of Africa and Asia without an HQ, Nathan chose to place his troops in Siberia. While of no real benefit through the early to mid game, the red team’s power of a fortified HQ (giving +1 to both defensive dice) would prove valuable in the late game.

The first turns panned out pretty much as expected. Jeremy took all of South America as well as North Africa to allow for future expansion in to Africa, his faction’s natural home. Trent split his forces between Northern, Southern, and Western Europe, already worried about the potential threat of the sand people.

Ben claimed the Australian continent and placed the bulk of his army in Southeast Asia, allowing him to claim the game’s first Resource card for expanding to four territories. Mark then pushed east and west from Alaska taking Northwest Territory, Alberta and Kamchatka. Finally Nathan split his troops between Yakutsk, Irkutsk, and Ural. 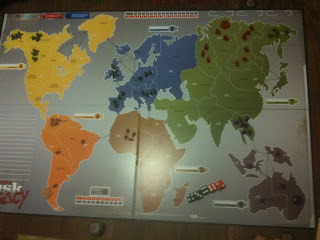 The Saharan Republic aren’t a greedy bunch, and were content to move into Central America while reinforcing the deserts of North Africa. Unfortunately, the paranoid and greedy Khan Industries weren’t too happy with their southern opponents sitting just across the Mediterranean, and initiated the first aggression of the game.

Not only that, but Trent pulled out the first scar of the game: an ammunition shortage which he placed in North Africa. With his high die roll reduced by one, Jeremy’s unfortunate Saharans were decimated, leaving him with no eastern defence. Trent took full advantage of this and moved in to Brazil to deny Jeremy the continental bonus.

The Saharan Republic’s HQ in Argentina was ripe for the taking with only one unit defending it, but Trent did not wish to risk further depletion of his forces, and left his units in Brazil. 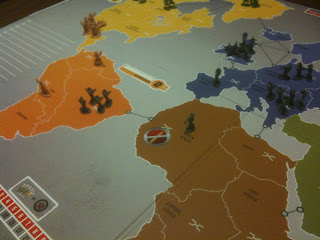 Meanwhile an agreement was forming between the Enclave of the Bear and Die Mechaniker. Mark withdrew all bar one of his troops from Kamchatka, and a non-aggression pact was made between Kamchatka and Alaska. The two new friends thus continued expanding into their own continents.

The Saharans then had their revenge and retook Brazil. It was not a pretty battle, and both sides paid dearly for this war. Khan Industries licked its wounds and decided that consolidating its hold on Europe may well be the better option.

This continued to be good news for Ben’s faction as he continued to spread into unclaimed territories in Africa and gain another card without having to engage in battle.

Left mostly alone in northern Asia, Die Mechaniker quietly continued to amass troops. Confined to just a few territories, Nathan wasn’t seen as much of a threat by the other players - a fact he was using to his advantage.

The mid game settled into a semi routine. Mark claimed North America; Trent claimed Europe and also became the first player to trade in four cards for a red star; Jeremy kept losing the bulk of his troops to either Mark or Trent;  Ben continued to reap the advantage of troop bonuses from holding so many territories as no other player wished to make themselves vulnerable by taking out Ben’s thinly spread troops; Nathan continued to trade Mongolia with Ben, build up his forces, and cajole the other players (rather successfully) into waging war upon each other.

Then the end game was upon the world.

The first major push to attempt to win the game was Trent’s. Except he didn’t realise it. He decided that he wanted to deprive Mark of the North American bonus, and pushed into Greenland. With three red stars in his possession (two star tokens plus his HQ in Great Britain), Trent only needed to capture one more HQ. All he had to do to win the game was take his ten or so troops in North Africa and defeat Jeremy’s two units in Brazil and one unit in Argentina.

But he didn’t. Being too worried about defending Europe and not seeing the game ending move right in front of him, Trent ended his turn.

This proved to be a great relief to all the other players, and to Nathan in particular. There was a good chance he was about to take the win on his next turn. He was planning to trade four cards in for a red star and then break his treaty with Mark by taking the bulk of the Die Mechaniker army across to Alaska to capture the Enclave of the Bear’s HQ.

However this also failed to pan out when Nathan’s plan was unwittingly thwarted when he was attacked by Ben.

Trent may still have had a chance to win on his next turn, but the Saharan Republic were not going to be defeated so easily. Jeremy traded in seven coins on his next turn to claim 17 bonus troops to go with the 3 regular reinforcements and the 2 bonus troops for holding South America. Most of those 22 troops went into Brazil, and with blood on their minds, the Saharans engaged in a bloody war for North Africa, ending Khan Industries’ immediate chance of victory.

From then on almost every turn saw one faction or anther have a tilt at victory. Mark’s Bears pushed into Europe through Iceland and then captured Trent’s HQ in Great Britain. Mark’s influence could go no further however, as he was unable to break the Saharan's hold on Venezuela.

Other than Trent, Ben was the only other player to trade in cards for a red star, so he too was seeking just one more HQ to conquer. The path of least resistance was through Africa to South America, but he failed in his bid to conquer Jeremy in North Africa.

Trent recaptured Great Britain and looked to the red menace in the east. The battle for Siberia became perhaps the most one sided large battle of the game. Die Mechaniker’s faction bonus kicked in big time. Not only adding one to both defensive dice, but having the added bonus of a bunker in Siberia, Nathan’s troops cleaned up the attackers with ease.

The game could not last forever though, and Ben finally managed to put together enough troops to take North Africa from Jeremy before pushing through the token resistance in Brazil and Argentina and capture the Saharan Republic’s HQ, thereby earning his fourth star and victory. 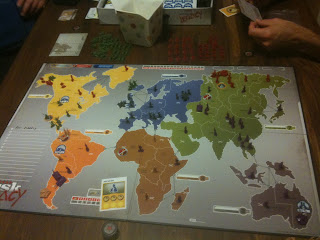 It was most definitely a hard fought game that had plenty of chances for victory. It was Ben, though, who became the first to sign his name on the board. For his prize he chose to found the Major City of Bento in Eastern Australia.

As all other players held on, each chose a lesser prize as well. Jeremy and Mark chose to add Minor Cities to the board (Jezeru in Peru, and (B.F.I (don’t ask) in Western United States), while Trent and Nathan chose to add a third resource sticker to two of the Territory cards (Great Britain and Siberia respectively).

All players throughly enjoyed the game and no doubt learned a thing or two about the mechanics of Risk Legacy. Expect a tougher battle for the world in Game 2.

Great to see your blog up and running again - it's not like you have a shortage of games to write about!

All the contents you have mentioned in the post its amazing and can be very useful. I will keep it in mind. Thanks for sharing such an awesome information keep updating. Looking forward for more posts. Thanks