2009 was another very enjoyable year of gaming. I only began my journey into the world of "proper" board gaming in 2008, and two years in, I'm still going strong. And I have no intention of slowing down. Ever.

So, what happened in this little gaming world of mine that finds an outlet in this even littler blog I call Up the vacuum thingy? Well how about we start with the quest I set myself for 2009.

That goal, I am pleased to say, was successfully met. I finished the year having played 19 games at least 3 times. All of these were games I had never played prior to 2008.


These are the 19 games in question (and the number of times I played them):

For the complete record of all games played (and by complete I mean including every player's score) you can read my 2009 Games Record. Given it lists all 233 plays for 2009, it is quite lengthy. :-)

And 233 plays is pretty good I reckon. Nowhere near as hardcore as some other bloggers I read, but it's definitely in the "serious gamer" category.


Speaking of being a serious gamer, I did have a second part to my quest in 2009 that I wasn't so successful at achieving. Again, let's go back twelve months and recap:
Part II of my Quest was spawned from something I've been piecing together over the last year. To fulfil the Quest, I need to create my own board game, with a fully working game completed by the end of the year. It doesn't matter if it isn't of professional quality, as long as it is fully playable.

No game creation appeared in 2009 I'm afraid. I ended up abandoning this goal fairly early on, especially as there was the minor matter of a wedding in November to help organise. So I've deferred this goal to become my quest for 2010. I'll blog about that shortly.

Finally, a recap of the year would not be complete without a count down list. Last year I counted down my top ten games for 2008. This year, however, I've decided to take a slightly different tack:

My Top Five Gaming Experiences for 2009

This was a rather surreal moment in my gaming life, and occurred on Sunday, December 13. It is best explained in the post I made on the following day, and which I will summarise here:

The Giggling One and I were lying in bed. I was browsing the net on my iPhone as I am wont to do. I remembered hearing about the Magic: The Gathering game on the Xbox 360, and reminiscing about the games of Magic I used to play online led me to check out a review of the game out of curiosity.

I then decided to head on over to Wikipedia to check out the latest expansions. I had a chuckle reading the amusing code names each of the sets of three were given (eg. Control, Alt, and Delete; Live, Long, and Prosper).

The Giggling One asked me what I was laughing at, so I showed her. Then, just like that she said "We should get it."

I was a little taken aback. This was a game she had never seen before, but she had heard me mention it here and there. I've played plenty of games of Magic online, but I've never actually played the real, physical-cards-in-your-hand version of the game.

So, on a whim we went out that afternoon and bought two intro packs for the 2010 Core Set, as well as eight booster packs, and placed these under the Christmas tree as our presents to ourselves.

Needless to say, if you noticed the list of games earlier in this post, we've since played a few games. We also went back in to our FLGS and bought the remaining three intro packs so we now have a nice selection of cards in all colours.

I have to say I was just a little worried about buying the game, what with it being the (perceived) domain of the geekiest of geeks, and coming with the inherent must-keep-buying-more-cards risk. I like to think we're mature enough and smart enough not to fall into the just-one-more-booster-pack trap. We've spent more than the cost of a regular board game on it already.

Still, it's been worth it. Now that The Giggling One has got her head around the basics and understands how the cards interact, we've had some fun games, with plenty more to come.

Well, achieving the first part of the quest at least. I've blogged about this more than once, but after playing as many new games as I could in 2008 (28, or 31 including expansions), it was time to concentrate on enjoying multiple plays of games.

While most plays of each game were in the single digits, I did get four games into double digits. Yes they were all light games, but 57 games of Zombie Fluxx is not only an achievement in itself, but a testament to just how darn fun the game is.

And interestingly, while I wasn't concentrating on playing new games, I still racked up an impressive 28 new games anyway. Which equalled 2008!

I'll still be logging all my plays for 2010, but won't have a specific play target. It will be interesting to see how my tally goes when I'm not aiming for a particular total.

When The Giggling One and I were first introduced to Werewolf, I wasn't too keen. It didn't sound like something I would be interested in.

And then, of course, we played it and loved it. It became a staple of HoGS games nights in '09, and as long as we had enough people we generally wrapped up the evening with a few games of Werewolf.

The highlight of the year as far as Werewolf is concerned was undoubtedly introducing it to, and moderating a game for, a group of fourteen (well thirteen plus The Giggling One) non gamers, nearly all of whom I hadn't even met before.

We played with three Werewolves, three Masons, a Seer, and a Bishop. After getting to grips with the first game, everyone was eager to play a second game now that they knew what they were doing and understood the nuances of the game. It was a nice way to end the dinner party, and not just for me.

And that's the great thing about Werewolf: it doesn't matter who you introduce it to - nearly everyone loves it. It's simple, requires just a deck of cards to play, and can be enjoyed with any moderate to large sized group.

It was rather fitting that Werewolf was the game that saw out 2009 for us, with three fun games played (again with Werewolf newbies) leading up to midnight. In actual fact, the third game was postponed part way through to bring in the new year, before The Giggling One began 2010 in style by successfully killing off the remaining villagers without being lynched.

My gaming life would not be what it is without the Hobart Games Society. The group has remained fairly modest throughout the year, with anything from six to sixteen gamers attending the regular games nights.

The Giggling One and I tried to get along to as many as nights as we could, and attended the vast majority of them. Even with two nights a month (the first Friday of the month, and the second Saturday following the first Friday - ie. two weeks and one day later) I'm still feeling like I'm not getting enough gaming. :-)

I'm hoping things may change in 2010. Thanks to Bernd's drive, HoGS is on its way from being a casual meet up to becoming an official organisation. We now have a constitution and everything.

At December HoGS we had our first proper meeting where we began to formalise proceedings. A committee was formed with Bernd as President (and Public Officer), Mark R as Vice President, Christine as Treasurer, and myself as Secretary. Ian T and Ian B also joined the committee as regular members.

I've had my doubts over whether this would ever get off the ground, and we still have much work to do to grow HoGS into something bigger and better. One thing's for sure: we've got a great group of dedicated gamers to lead the way, and that's a promising start.

This was my number one moment for 2009, gaming or otherwise. Full stop.

The Giggling One and I tied the knot on November 14, 2009 in a beautiful ceremony at Fitzroy Gardens followed by an awesome reception at Barilla Bay. It will certainly be a day I will never, ever, forget.

There are two ties to gaming that this has for me, which is why this qualifies as my number one gaming experience for 2009.

Firstly: fudge. For the bonbonnières at the wedding reception we decided to give our guests small boxes containing fudge. But not just any fudge. Apart from being made using our good friend Brian's secret fudge recipe (he would not divulge the actual quantities of the ingredients even to us (though we got a good look as we helped him make it)), we gave the fudge a gaming theme.

As well as the hearts that The Giggling One insisted we have, we also cut the fudge into dice and meeples. The latter was achieved by finding a person-shaped cookie cutter and working it into the shape of a meeple using pliers. The dice were simple cubes to which we added icing for the dots. 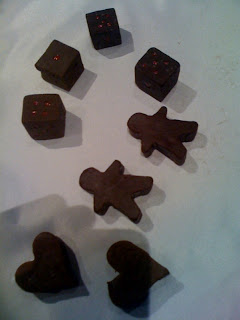 Finally, let me reflect on the second tie my wedding had to gaming. That one is simple, and can be summarised in three words: The Giggling One.

Finding someone to love and spend the rest of my life with is amazing. To have that person share my love of games? I really can't find a word to describe just how majorly, wonderfully cool that is.

My gaming future is bright.