Turn Order and Faction:
Mark and Trent were the only two winless commanders coming in to Game 4, and were keen to have their name on the board this time. The other three were not going to sit idly by and let this happen of course. Well, actually, for the most part, they were. But let’s not get too far ahead of ourselves.

Nathan won the roll off for first choice of faction and starting location. He decided it was his turn to claim the Purple Tide (TM), and he placed them in Ontario. He then set out to intimidate his opponents by arranging his tanks in a threatening formation in the South Pacific Ocean.

Mark sought to cut Halitosia off from the rest of the world and placed the red Die Mechaniker HQ in Southeast Asia. Surely no one would now be silly enough to place in Halitosia...

Cue Ben. In a moment of what some might favourably call “misplaced self belief”, he took the grey armies of Khan Industries and placed them in Eastern Australia where he had earlier founded his Major City of Bento. Round two of the Mark v Ben battle-a-thon was all set to begin.

Trent’s choice of faction was a no-brainer, and he placed The Saharan Republic in Brazil.

Jeremy was once again left to go last and scored the dud faction. He placed the Enclave of the Bear HQ in South Africa. 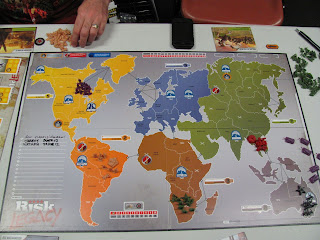 With no immediate threats, Nathan commenced the game with a standard expansion across North America, leaving only Eastern United States and Central America without any purple troops.

Mark then made the first move against Ben and plonked all bar two of his troops in Indonesia.

In response, Ben took Khan Industries into Western Australia and then declared war on Die Mechaniker. The battle for Indonesia was long, arduous, and bloody, as Ben fought to the bitter end.

Mark held firm, however, and was left with five valiant troops holding on to Indonesia while Ben had just three troops on the board altogether: one in Western Australia and two guarding his HQ in Eastern Australia.

Far from the Halitosian conflict, Trent’s first turn saw him expand across South America and into Central America, sending a warning to Imperial Balkania that North America would  not be a solely purple continent.

Jeremy’s Enclave was next and put caution before conquest, expanding across Africa, but leaving North Africa and Egypt unclaimed.

In to Round 2, and Nathan was also cautious as he reinforced his current holdings but decided not to expand.

With Ben on the ropes, Mark went in for the killing blow and eliminated the remaining members of Khan Industries. That left Mark with the Halitosia bonus, and Ben needing to find somewhere to start again.

Ben parachuted his four new troops into Irkutsk and immediately moved three of them into Siberia, with one falling to the local Gulag resistance.

Trent then came to the conclusion that his biggest problem was that he hadn’t been overextending himself, so he decided it was time to change that. He placed all five of his reinforcements in Central America and went on a rampage through North America.

The Saharan Republic cut a swathe up the west coast of North America, taking Western United States, Alberta, and Alaska. He also tried a 1v1 battle for Northwest Territory, but Nathan’s troop was victorious.

With the Saharans less of a threat, Jeremy ended round two by claiming the last two territories in Africa. 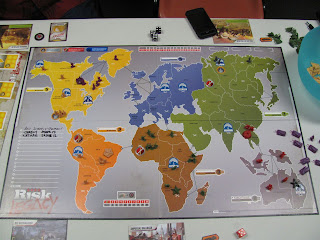 Round 3 was relatively benign with Nathan and Trent exchanging Alberta, while the other three reinforced and expanded to one or two empty territories.

The action picked up again in Round 4. Nathan garrisoned his troops in Ontario in preparation for the battles to come. Mark eyed off the Enclave troops amassing in the Middle East, and moved a large contingent of his own troops in India.

Needing an action fix, Ben decided that Alaska looked like an easy target and easily conquered Trent’s lone troop in that territory.

Trent then bolstered the Saharan numbers by trading in two cards to earn four more troops. This gave him an attacking force of 12 troops against Nathan’s 8 defending the Imperial Balkania HQ in Ontario. The resulting battle was a massacre, and Trent then continued in the same vein and eradicated the purple troops altogether.

This left Jeremy rather nervous, with Trent to his west and Mark to his east, both seeking one more star to win the game. He wasn’t in what you might consider a fantastic position either as he was the only player yet to earn a card, and attacking anyone right now would leave him vulnerable. Jeremy therefore ended round four by just moving a couple of troops into vacant territories in Europe. 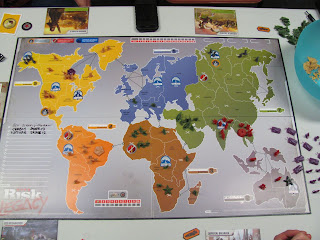 Nathan reestablished the Imperial troops in Japan to open the action in Round 5.

Mark then moved north in to China and launched a successful attack on Khan Industries in Siberia.

Ben attacked Alberta from Alaska, but it left him with only one troop remaining in the Canadian province. He then retook Siberia from Mark.

With Ben extremely light on for troops in North America, Trent took the chance and grabbed a second continent. With the Americas fully under his control, Trent stood to receive 13 reinforcements on his next turn.

With nowhere near enough troops to keep the Saharan Republic at bay, it was now or never for Jeremy. With Nathan and Ben in no position to weaken Trent, and Mark building up for a win himself, Jeremy was left with no choice but to go all-in.

The Enclave of the Bear reinforced in North Africa and pushed into Brazil. The attack was a success, but Jeremy wasn’t content to leave Trent with North America either. He took Venezuela but failed in his bid to invade Central America.

With no avenues remaining on the western front, Jeremy had just one desperate move left. He’d just taken the Saharan HQ in Brazil, and with the majority of Mark’s troops in India, this left Southeast Asia open to attack from China. From there it would be a hop, skip and jump to Eastern Australia for a fourth HQ.

Jeremy put his new plan into action and took his troops through Afghanistan into China and attacked the Die Mechaniker HQ. Unfortunately for him, the dice bonuses granted by the red HQ had a devastating effect, and while the attack was ultimately successful, only two Enclave troops remained to occupy Southeast Asia - not enough to make it to East Australia. With an unlikely win now impossible, Jeremy left it at that. 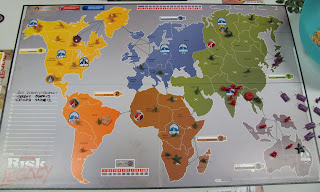 As you can see, the Enclave of the Bear was now spread so thin it was practically translucent. This left Mark and his red army in prime position to take victory. The only thing that could possibly scupper his chances was a strong move by the Imperial Balkania army currently residing in Japan.

Nathan wasn’t prepared to take on Mark, however, and he just spread through Asia with a token attack on Jeremy in China.

Mark then had is sixth turn, and took the obvious path to victory. He firstly removed the two pesky green troops in Southeast Asia and then marched virtually unhindered into South Africa to claim his third HQ to go with his star token and claim the win! 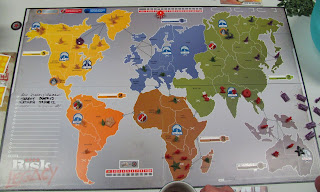 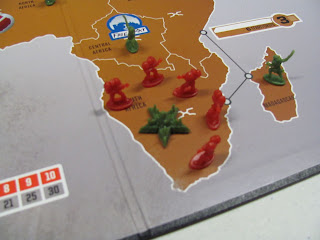 Mark’s win left Trent as the only winless player after four games. For his prize, Mark chose to found the Major City of Red Tide in Southeast Asia. This was quite a cunning move as it meant only Mark could start future games in that key location.

For the minor rewards, Ben chose to add a third coin to the Eastern Australia card; Trent placed the ninth and final Minor City in Greenland and named it Nimbin; Jeremy added coin number three to the Central Africa card; and Nathan placed one more coin on the Japan card.

As a result of having nine Minor Cities on the board, we could finally open the first secret envelope. With great excitement we looked inside the envelope to see....