Could you really blame me if, when asked to play a game about German politics, I was a little trepidatious? I didn't think so. Politics leaves me indifferent at the best of times, and I don't exactly jump for joy at the thought of an election.

So why is it then, that playing a game in which you represent a political party vying to outdo your opponents over the course of seven elections is actually quite enjoyable?

I'll tell you why. Strategy. If you ignore the political dressing, the game comes down to a series of interesting and clever strategic and tactical choices that you use to boost your score. Have the highest score at the end of the game, and you'll be the champion of Die Macher.

For the heads up on this five hour monster of a game, I suggest you do what I did: head over to Board Games with Scott and download Scott's excellent video review (it goes for about an hour). You can, of course, stay here instead and get the Up the vacuum thingy take on Die Macher.

One of the first things I asked myself when I was approached to play this game was "Five hours? Are you mad?". And after I realised that I was, I then wondered what "Die Macher" actually meant in English. So I typed "die macher" into Babel Fish, which translated it to "more macher". Not particularly helpful.

I then tried translating "Die Macher" on the chance that capital letters might help. What do you know, I was right. This time it spat out "The doers". Which is quite appropriate because I was about to play a game where I'd be doing a lot of stuff.

With that in mind let's take a quick (and I use the word "quick" advisedly) squiz at the stuff with which you'll be doing the, er, other stuff.

These are (most) of the bits and pieces that the green player starts with. The game can accomodate up to five players, each representing a political party in one of five colours: black, yellow, red, green and pink. Yes, pink. I do believe this is the first time I've ever seen a pink player in a board game.

There are various cubes and flattened cubes which you use to keep track of various things on the boards; there are cards representing your shadow cabinet, bribes and various denominations of Euros; and there are little tiles used to tell you what your party name is, and to indicate that you are up for a coalition during an election (that's the telephones - no face-to-face shenanigans here).

In addition to the stuff pictured above, you get five cards representing your party's policies. Essentially, these cards are used to show whether your party is either for... Now, if you're like me and party politics leave you cold, then don't worry. The issues represented on the cards aren't really the focus here. You see, this is really just a card matching game dressed up in political clothing.

You don't really care whether your party is for or against nuclear power. All you're trying to do is match your cards as best as possible with the four issue cards in each state.

Each of the seven elections during the game has four public opinion cards associated with it (though these can be changed during the game). As the idea is to get as many votes as you can in each election, matching your party's policies to each state's issues is the key to doing well.

Don't fret though, because you have the power to change public opinion, and if you play your cards right (literally) those ignorant voters will soon come around to your way of thinking.

One way to do that is via media control. During the game you'll get the chance to become your media mogul/despot of choice by placing media markers (they're the big cubes you start with) on the various election boards.

Each election board can have up to five media markers on it, and if you have more than any other player, then you control the media in that state. And that means power (cue maniacal laugh). Once per turn any player with media control in a state may switch out one public opinion card, and replace it with another, preferably one matching their own.

You know what? I think it's time we looked at the board itself to see exactly what we're dealing with.

Each election board looks a little something like this:

Not all elections are created equal, and each state is worth a different number of points per seat you win. Here are some examples:

With a maximum of 50 seats available to win in each election, you have to pick and choose your battles. You won't be able to win the 50 seats in every election so it makes sense to save your resources for the elections that'll earn you the most points.

In the example cards above, winning 50 seats in Hessen will get you 48 points, whereas you'll get 60 points if you win the same number of seats in Freistat Bayern. Therefore, winning Freistat Bayern is more valuable than Hessen.

With the cards coming out randomly, and quite a few more than seven state cards in the deck, the points on offer varies from game to game.

OK, so concentrating on more valuable elections is generally a good thing (so expect your opponents to be doing it as well), but how exactly do you win seats in an election?

That, my friend, comes down to two things: meetings and multipliers.

Think of meetings as chances to meet and greet the public. The more you get out there kissing babies, the more people are going to vote for you. You have to fork out €1,000 for each meeting, but without them you're not going to get far.

Once per turn, you'll get a chance to plonk down up to four meeting markers (little cubes) on any of the four election boards, though you can't exceed ten in any one election.

Which leads us to the multipliers. When you count the seats won in an election, you multiply the number of meeting markers in that state by the magic multiplier number.

But what is this popularity level of which I speak? Is it not the same as matching public opinion? No, it's not.

Let's have a gander at the election board again:

Obviously, an increase in popularity is good as it increases your multiplier at vote counting time.

Let's have an example to clarify. Say you have placed the maximum ten meeting cubes on that board. Say that you have also increased your party's popularity to +2. Say, also that two of your policy cards match opinion cards on the board, but one of your policy cards is opposed to another of the opinion cards. In this case your multiplier will be + 2 + 2 - 1 = 3. The number of seats you will gain in the election is therefore 10 x 3 = 30.

If those 30 seats are more than anyone else, you win the election. Woohoo! Don't celebrate too early though as you'll find that the maximum 50 seats will be won by at least one player in almost every election.

Once everyone's counted their seats, these are then converted to points as per the state card. Everyone can get points regardless of whether they win the election or not. Which is not only nice, but an essential way to keep your score ticking over if you know you're not going to win an election.

And it's then rinse and repeat for seven elections (although the seventh election count is conducted immediately following the sixth, so you have less time to influence the result).

And that's how the game works. You play cards and cubes that let you affect opinions and popularity in each state in order to maximise the number of seats you gain in each election, and thus maximise your score.

At any one time, there are four elections (one current and three future) that can be affected/manipulated, so you'll actually have four election boards on the table like so: 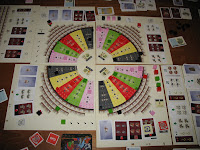 Now for the sake of brevity and simplicity I have deliberately skipped over a few other elements of the game, such as the national opinion board (which tracks national opinions and party membership numbers), shadow cabinet cards, opinion polls and bribe cards, but you should get the idea.

What? You want to know about these things too? Well alright then, but only because I went to the trouble of finding these pictures and it would be a shame to waste them.

For the cost displayed on each shadow cabinet card, you may play that card to a particular state during the designated phase of each turn, and take one of the actions on the card. Actions can be things like extra seats in an election, or replacing someone else's media marker with your own, or increasing your popularity in that state. All quite handy, but these cards can only be used once each during the game.

Opinion polls are available for blind auction (you can't see what you're buying during the bidding) each turn and let you take one or two of the actions on the card: 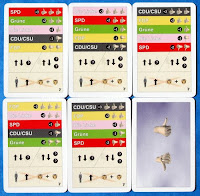 If you win the auction you get to see the card, and if you're lucky one of the options will be to boost your own party's popularity. If not, you can always elect not to publish the poll, and instead roll two dice to increase your party membership.

And then there are bribes, or should I say "party contributions": 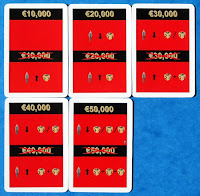 You can use these to get yourself some extra cash at the expense of party membership, or show what an upstanding party you are and ignore the money to increase your membership.

If you're still with me, then well done. As I said at the start, if you're not into politics and you can see through the politics to the strategy beneath, it's actually a good, challenging game.

Die Macher is not for the casual gamer. Don't try to jump your new gamer friend straight from Carcassonne to Die Macher - you may fry their brain. You have to have some gaming pedigree behind you, and the willingness to sit down for five hours (our first game actually took six) to see it through to the end.

If you like your games on the strategy heavy side of the spectrum, then you'll probably get a kick out of Die Macher. Just pretend it's about vying with evil aliens for control of the Galactic Council and it'll be a blast.