Oh Agricola how I want to love thee, but thou overwhelmeth me, leaving me battered, yet yearning for more.

Anticipation can be a killer, and to say I was hyped for this game is the understatement of the (admittedly short so far) year. Agricola had been on my Christmas wish list, and true to form, my ever-loving better half snuck it under the Christmas tree while I wasn't looking.

If you don't know about Agricola, know this: it is the highest rated game on Board Game Geek - a lofty accolade indeed. 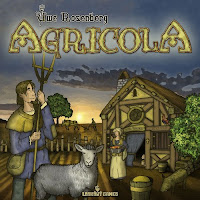 It was with high expectations, then, that I opened the hefty box, removed the plethora of pieces, congestion of cards, and bulge of boards. You see, Agricola is a game of such depth and, dare I say it, underlying complexity that it really requires numerous plays before you get a true indication of what it has to offer. Only then can you really sit back and say "this is a bloody great game", or "this game really sucks and I can't believe I invested so much time building silly little fences for ridiculous cubic animals".

I look forward to seeing which side of the silly little fence I fall on.

As I said, Agricola has an extraordinary amount of depth below its simple farming conceit. As such, I could never do the game justice with an in-depth look at the machinations of 17th Century farming. If you need more information, there is more than enough to quench your thirst at Board Game Geek.

But let's at least dip our toes into the metaphorical waters of the game.

Agricola, pronounced "a-GRICK-oh-la", is the Latin word for "farmer". As you may have gathered by now, it's a game about farming.

Everyone starts with their own little patch of ground:

As you can see your farm consists of 15 spaces. During the game it is your responsibility as a responsible farmer to responsibly develop these spaces into a working farm.

At the start of the game, two of these spaces are taken up by your cosy little wooden hut. It's not much, but it's home. If you're not partial to wood, you can upgrade you home to clay or stone during the game.

You can expand your home to other spaces during the game, as well as plough (sorry, "plow" as the Americanised version of the game says) fields, fence areas to form pastures for animals, or build a stable or two.

Of course, it's not going to be easy, and your family is going to have to toil for their supper. You start with a mummy and a daddy farmer, and during the game you'll have the option to grow your family (the nights are long and cold) so that you have more hands to work for you.

The way it works is that each round players take it in turns to choose a specific action to take with one of their family members. The actions that are available depend upon the number of players, and more actions become available during the game.

Once one player chooses an action during the round, no other player may choose it. All of the available actions can be found on the three (yes, three) game boards:

Other spaces are devoid of actions. Some of these spaces are filled at the start of the game, such as these action cards used in a 4 player game: 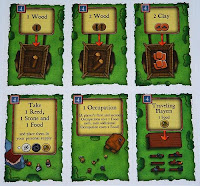 The other spaces (with a Round designation on them) will be added to as the game progresses. Actions you will come across include:

Obviously, the strategy is to select the actions that are best going to improve your farm. You'll want to collect resources to build stuff, grain and vegetables to plant in your fields, and collect animals to place in your pastures (though you are allowed to keep one in your home as a pet. Awww).

I bet you're wondering what exactly you will be physically collecting. Let's take a squiz at some of the pieces that come with the game:

The cubes represent animals while the discs are the various resources (clay, wood, stone, grain, vegetables and reeds). Oh and the little yellow discs with plates and cutlery represent food.

Now this is quite boring, so many people have taken to replacing the standard pieces with animeeples and vegimeeples:

Much prettier I think you'll agree. I must get my hands on some of those.

So you gather all these resources to further expand your farm. But what should you focus on? Well, you shouldn't focus. Focussing is bad m'kay? You should diversify, because at the end of the game you will actually lose points for not having stuff. See the score summary:

See the left-most column? It says "-1 Point". You lose points if you don't have at least one of everything on that list. And it is remarkably easy to get a few -1's creeping in to your final score if you're not careful.

That's the core of the game then: take one action per family member each round and use those actions to build up your farm so that you can maximise your score at the end of the game.

Sounds relatively simple, but where the depth of this game really socks it to you is with the sheer number of cards.

The Occupation and Minor Improvement cards are also sorted into decks based on their complexity. You can play with the Easy deck, the Interactive deck, or the Complex deck. Or, if you're feeling particularly masochistic, you can play with all the decks mixed in together.

Everyone starts with a hand of 7 Occupations and 7 Minor Improvements, and once you've got your 14 cards, that's what you're stuck with for the game. With so many different cards, this means you're going to get a different group of cards every time (unless there is some freakish occurrence when all the animeeples align or something).

And that's what sucks you in. You peruse the cards in the decks and think to yourself "Ooh that might be useful", and then you play 20 games trying to get dealt that one card or card combo that you just have to try.

There's a semblance of normality to each game, though, as the 10 Major Improvements are always available for everyone to purchase. They are very useful, so trying to play through the game without getting your hands on one is, quite frankly, just plain stupid.

And that's Agricola. Accumulate stuff in order to improve your farm as best as possible so you maximise your score at the end of the game. Simple. Ish.

Getting back to the whole hype killer thing, Agricola has so far lived up to most of my expectations. Like I said, however, it'll take plenty of more plays of this baby before I can truly judge its worthiness. Things are looking good though, and I've no intention of quitting the farm any time soon.

Whoa!! What a review! Hey Jeremy, are you posting these on BGG? actually I just looked - you're not!
Don;t deny the world access to these gems!!