I can now proudly say I have played what I regard as the triumvirate of gateway games: Settlers of Catan, Carcassonne, and Ticket to Ride.

I'm not so proud to say I got my arse whipped on Friday night, finishing stone cold motherless last against three other Ticket to Ride beginners. 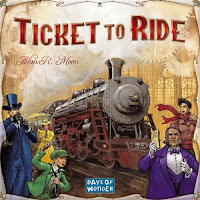 The concept of Ticket to Ride is very simple: place trains on a board to link up cities and score points.

As you can see there are routes of various colours linking the cities on the map. In fact, there are nine different coloured routes: black, white, red, orange, yellow, pink, green, blue and grey (or "gray" if you want that authentic US feel).

In order to place trains along a route, you need to collect Train Car cards of the corresponding colour.

The number of Train Car cards you need to collect is equal to the number of spaces between the cities.

For example, to link Seattle and Helena, you require 6 yellow Train Cars. To link between Salt Lake City and Denver you need either 3 red carriages, or 3 yellow carriages.

Things can be helped along by a Locomotive card (the bottom card in the image above) which acts as a wildcard and can be used to make up a set if you don't have enough cards of the right colour.

Additionally, grey routes can be completed with any set of cards, as long as they are all of the same colour.

On each turn, you can take one (and only one) of three actions:

We'll start, as is customary, with number 1.

There are 110 Train Car cards all up (12 of each colour, and 14 Locomotives). Each player gets 4 to start with. The remaining cards are shuffled and placed face-down. The top five cards are then placed face-up next to the board.

There will always be five Train Car Cards face-up. Whenever a face up card is taken, the top card of the deck replaces it.

Your choice for drawing Train Car Cards is simple: you can draw a maximum of 2 cards on your turn. You can either take a face-up card, or take pot luck by drawing the top card from the deck.

The only exception is that if you choose to take a face-up Locomotive card, that is the only card you may take this turn. If you take a face-up card, and a Locomotive replaces it, you can't then nab the Locomotive. Of course, if probability favours you, and you draw a Locomotive from the top of the deck, then there's nothing stopping you from taking a second card.

Alrighty, so you've drawn a few cards and you think it's time you staked your claim to a route. That's action number 2.

All you do is take a set of cards that match the colour of the route (or any old colour you like for a grey route) and play them face-up so that the other players can see you're not cheating (not that you would cheat of course).

As I mentioned earlier, the number of cards you play is equal to the number of spaces along the route. You can only claim one route per turn.

You then place the cards in the discard pile and place your own trains on the spaces of that route. Like so: 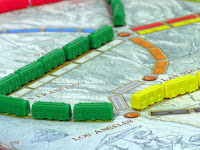 Every player gets 45 trains, and you need to take care where you play them for two reasons.

Firstly, you score points based on the length of each route you claim. the longer the route, the more points it is worth.

A route one space long will only get you 1 point, while completing a route six spaces long will get you 15 points. It's therefore worth collecting/hoarding cards for a while (something I didn't do which cost me dearly) to claim the longer routes.

The second reason you want to take care with your train placements takes us to the final action you can perform on your turn: drawing Destination Tickets. 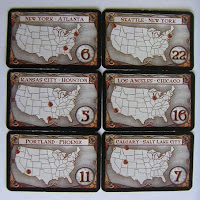 Destination Tickets are cards with two cities printed on them. Everyone gets three of these at the start of the game (though you discard one of them if you wish).

On your turn you can draw more Destination Tickets if you wish. You simply take the top three cards from the face-down deck of Ticket cards (there are 30 cards all up), and keep 1, 2, or all 3 of them.

You keep your Destination Tickets secret until the end of the game at which time you score bonus points equal to the number on the card if you have a continuous train network connecting the two cities on that card.

The longer the route required to link the two cities, the more points you will get if you link the cities.

It's therefore important to play strategically and efficiently so as best to complete routes between the cities on your Destination Ticket cards. Having two cards where you can share routes is generally a good idea.

It may also pay to claim a route that blocks an opponent from linking up his or her trains in one long route. This will make it harder for them to link two particular cities.

In case you're wondering how the game ends, it's when one player has 0, 1 or 2 of his or her trains remaining. All players then have one more turn and the game finishes.

The player with the longest continuous route also scores a bonus 10 points.

Reporting briefly on the game played on Friday night at HoGS, all four of us were new to the game (though I believe David may have played once a few years ago).

At the start of the game I made the rookie decision of ditching the high scoring, long distance Destination Ticket in favour of two low scoring, easy to connect cards. With hindsight I would have kept all three cards.

The game started out with everyone grabbing the short routes in the middle of the board, before Cathy (I apologise if her name is spelled incorrectly) began amassing a large hand of Train Car cards and began to grab the long routes one by one.

Not only that, but she managed to link all 45 of her trains in one long route to claim the longest path bonus at the end.

Despite only having two relatively low scoring Tickets, the long routes were enough to give Cathy the win with 107 points.

The Giggling One successfully completed four Tickets and came second on 99 points.

David and I were left in their dust. David managed 70 points, while I scored a paltry *cough* 53 *cough* points.

Here's the final board (Cathy was red, David was green, The Giggling One was blue, and I was black):

It was quite fun, but also frustrating to finish with such a low score. I'd love to play again and apply the lessons I've learned (claim more long routes, keep higher scoring Destination Tickets).

In fact I think that will be my next New Year's Resolution: of the new games I only played once this year, play as many as I can again next year. I shall endeavour to make Ticket to Ride, or one of its sequels, one of those games. It's worth it.