Two more milestones were achieved here up the vacuum thingy this week.

Firstly, the lads over at The Spiel have added a link to this blog on their site (and I finally joined their site after listening to Stephen and Dave for over a year). If you like your board games (and let's face it, if you're reading my blog then you probably do) I highly recommend giving The Spiel podcast a listen to on your mp3 player of choice.

The second milestone was that after purchasing the bundle of goodies I keep harping on about, last Friday I finally played Tigris & Euphrates, meaning I've now played all five games. Woohoo! 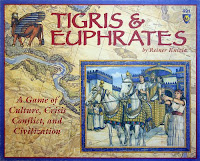 I bought Tigris & Euphrates (T&E) knowing nothing about it other than it was one of the top rated games on Board Game Geek (it's currently sitting at number 5 (out of 4845 (and if you're at all interested, the lowest rated game is tic-tac-toe))).

It's fair to say, in fact, that of the five-game bundle, I deliberately left T&E until last thinking I wasn't going to enjoy it. It looked too chess like, what with all the strategic placing of tiles on a board.

I'm happy to report that I was wrong. Sure, there's strategy involved but it's not as taxing as you might think. There are enough avenues to collecting victory points that no one is going to be completely shut out of the game. Certainly there are ways to build and defend strong positions, but there's always a way to exploit another player's weakness.

In short, I really enjoyed the game. I made some decisions that were, in hindsight, poor, and that I probably wouldn't do again. Then again, all four players were rookies so there was no advantage of experience for any of us.

OK, let's get into the game play and then, as usual, I'll finish with a quick summary of the game we played on Friday night.

T&E is played on a board. Said board looks like this (as usual, click on any image for the full size picture):

The board has nice artwork depicting the Tigris and Euphrates rivers flowing through the ancient civilisation of Mesopotamia.

As a side note, the game keeps reminding The Giggling One and me of one of our favourite songs: The Mesopotamians by They Might Be Giants (from their album The Else).

The board is divided into a grid of 176 squares (16 x 11) in which players take turns placing tiles and leader disks.

Civilization tiles (there are other tile types I'll get to in due course) and leaders, come in four colours: blue, black, green and red. Each of those colours is representative of a different "sphere" in which players try to win victory points.