Picture yourself in a boat on a river, with tangerine trees and marmalade skies...

Picture yourself on a Caribbean island, with tropical rainforests and azure skies.

But what about the boat? Well that's at the docks and you're loading it with goods to ship back to the motherland.

This, is Puerto Rico.

I've been dying to try Puerto Rico for quite a few months. It was on my "must buy" list for a long time, simply on reputation alone, and when I discovered it in a bundle with four other top rated games at GatePlay.com, well the rest is history.

How I've quite managed to own the game from the beginning of July to the end of October without playing this beauty amazes me. Nevertheless it wasn't until Saturday 25 October 2008 (coincidentally the same date I first became an uncle), that I finally played my first game of Puerto Rico.

Before I get into the nitty gritty, I should point out that I generally like to throw a splash of colour in to my posts in the way of images I've shamelessly pilfered from Board Game Geek. But do you think I could find any decent images of the various game components on the 18 pages worth of pictures?

No. So instead I took some pictures of my own. Using my mobile phone. The end results were, to put it mildly, less than stellar, but I'm not going to get all the bits & pieces out again just for the sake of this blog, so please forgive my shoddy camera work.

Enough of the bollocks. On with the show.

Once again, picture yourself on a Caribbean island. Specifically, the island of Puerto Rico.

You are an entrepreneur of sorts, and your job is to manage the production of goods, and see those goods shipped back to the old world.

You have a choice of what goods to produce. There are five different types of goods: corn (yellow), indigo (blue), sugar (white), tobacco (brown), and coffee (black). You can end up producing all five if you wish, though it's more likely you'll be concentrating on two or three. 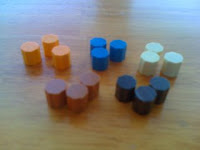 Producing these goods is a two-step process (well, except for corn but I'll get to that shortly).

Firstly, you're going to need a plantation. The more plantations you have (and you can have a maximum of 12), the more raw goods you can produce. 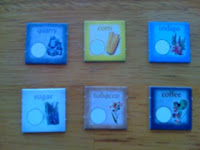 As well as plantations for each of the five goods, you can also build quarries that don't produce any goods per se, but simply help you reduce the cost of purchasing buildings.

Speaking (blogging?) of buildings, there are two types of buildings, and you're going to need the first type - known as production buildings - for the second part of the production process. Indigo, sugar, tobacco and coffee produced at your plantations need to be processed further in order to end up with the finished product.

Corn is a finished product straight away so you won't need a production building.

So, for example, to convert raw sugar into the finished product that is actually useful to you, you'll need a Sugar Mill.

The remaining buildings are called violet buildings because they are, get this, coloured violet. 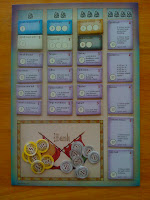 Violet buildings give you bonuses during or at the end of the game that help you towards your goal.

Now, having plantations and buildings is all well and good, but they're not going to get things done by themselves. You're certainly not going to get your own hands dirty, so you're going to need colonists to do all the hard labour for you.

Colonists (or, as Brian likes to call them, sultanas) sail in on the Colonist Ship every so often and are allocated to you and your rivals.

Where you set your colonists to work is up to you. You'll often not have enough colonists to fill all the vacancies in your colony so you'll need to decide what is more important to you. Without a colonist on a plantation or in a building, it simply won't function.

Before you know it you'll have your own little empire working away, so that this:

Note: this is the one image I did nab from Board Game Geek.

You'll notice that, along with goods, the top right corner of the board pictured above contains doubloons (used to purchase buildings) and upside-down victory point chips (because you don't want other players knowing exactly what you have). Here's what the victory point chips look like upside-up: 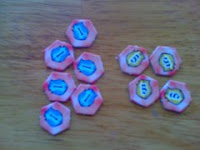 "Hmmm," you think, "Those doubloons and victory point chips look quite handy. How can I get my hands on some of that doubloony and chippy goodness?"

The catch is that there are only three cargo ships available at any one time, and each only takes one kind of good. When to load ships, and what to load them with is key to getting yourself ahead, especially as each ship has a limited number of goods it can store in its hold.

Which three ships are used in the game is dependent upon the number of players. 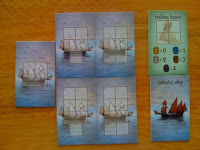 Other than the five cargo ships and the colonist ship (remember that's the ship the colonists arrive on), the picture above also shows the trading house.

The trading house is one of the ways you can make money. Instead of shipping goods, you can instead choose to trade them. The amount of money you receive depends on the type of good you sell. Corn, for example, has a trade price of 0 doubloons (though with certain violet buildings or a privilege you can actually get some doubloons for it) while coffee sells for the relatively princely sum of 4 doubloons.

So now you've got an idea of what's what, you may be wondering how on earth this all fits together. That, my friends, is where the roles come in.

During the game each player gets to choose roles to undertake that allow everyone to take certain actions.

There are seven different roles to choose from: settler, mayor, builder, craftsman, trader, captain, and prospector. 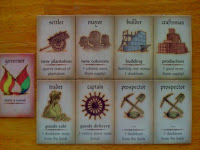