I can stop now, right?

So, as the congratulatory cheers die down, it's time to reflect on the game that took my tally to the magic quarter century.

Fittingly, it was a game designed by the same man who designed the game that started this whole board game obsession malarky for me: Klaus Teuber.

I still remember with great fondness the time I first played The Settlers of Catan. Not just because I was a first up winner, but because it started me down this road of board game geekdom. They don't call it a gateway drug game for nothing.

So via Settlers and Hoity Toity, the third game I've played by Klaus Teuber, and my 25th new game of the year, is...Löwenherz!

Translated into English, Löwenherz means Lionheart. However, as the game was only ever released as Löwenherz, even in the English language version, that is how it shall remain, even if it means having to either copy-paste or use alt+148 every time I want to type "ö".

Löwenherz works best as a four player game, which is the reason Bernd chose it on Saturday night when I, The Giggling One and Ian joined him for the evening.

Ultimately, the game is about Power Points. Each player takes the role of a prince vying for the right to take control of the kingdom when the dying king finally carks it. The player who amasses the most Power Points during the game wins.

The game is played on a modular board, with the kingdom made up of six large square pieces, each subdivided into 25 spaces. Here's a look at two of the six pieces to give you an idea: 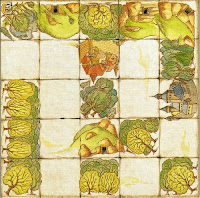 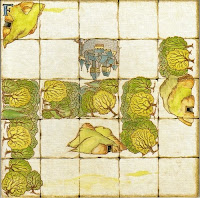 The basic game sets out a specific pattern for the pieces to be placed in, but we, being anything but basic, went for a random layout.

Once the pieces are in place, you end up with a playing area 15 spaces long by 10 spaces wide.

Each space on the board will either be blank or contain forest, a hill or a town.

These are important because placement of pieces in this game is everything.

At the start of the game (and I'm describing the random variant here, not the basic setup which has a set configuration to begin with) everyone gets to place 3 castles and 3 knights on the board.

Castles may only be played on blank spaces, and no player may place two castles within 6 spaces of another of their own castles.

Generally, placing castles next to or near a town is a good idea. Why? Because during the game you're going to be creating regions by placing walls around your castles, and for every town inside any of your regions, you get an extra 5 Power Points.

In fact it's fighting over ownership of towns that tends to decide the outcome of the game. At least it did in our battle.

Once everyone's placed their castles and knights (knights have to be placed immediately adjacent to castles to begin with) then the turns begin.

Each turn, an action card is turned over. Most of the action cards show three pictures designating the three actions that can be played this turn. Three or so of the action cards drawn during the game show silver mines (you get 1 point for each silver mine in your regions), and one card (which will be one of the last 4 cards drawn) reads "The King is dead!" - or it's equivalent in German which I can't recall (we were playing the German version).

When the action card with the three pictures gets drawn, everyone bids for a particular action to play that turn. With four players this creates something of a dilemma, because well, 4 just doesn't fit into 3.

Someone's going to miss out and not get to take any of the actions. But don't fret, because there's usually some sort of compensation involved.

So who chooses what? Well, one at a time starting with the starting player (duh!) players put down a card signifying which action they want to take - either 1, 2 or 3.

Actions are then taken in order from top to bottom with the person who chose that action taking it.

If two people choose the same action then a battle to the death dressed in full armour with nasty sharp swords and pointy lances takes place. Either that or a peaceful negotiation.

Basically, the two players who want to take the same action try and come to a deal where one player gives the other player a sum of money in return for being able to take the action.

If they can't come to a deal, or three or more players choose the same action, then it's a battle to the death dressed in full armour with nasty sharp swords and pointy lances. Or, maybe, a "duel" where players secretly make a bid, and the player who bids the most takes the action and gives his or her ducats to the bank. Whichever you prefer really.

So what are these actions you can take?

Well, if we glance back up at the pretty picture with the action cards, we'll use the two appropriate cards (the first and third cards in the picture) as examples.

In fact, we'll start with the third card in the picture - with a money bag at the top.

A money bag simply means you take that many ducats from the bank. Simple. Theoretically this can be split if more people choose that action, but that's just silly.

Wall pieces mean you can build that number of wall pieces on the map. The card pictured shows 2 wall pieces, but others could show 1 or 3.

Walls can be built pretty much anywhere except between castles and knights of the same colour, and not within a completed region. A region comes into existence when one, and only one, castle is completely separated from all other castles on the board by walls.

So in the early game what you're aiming to do is build yourself regions, preferably containing at least one town and some silver mines, and then reinforce and expand your territories.

The sword and shield action is what allows you to do this reinforcing and expanding. With this action you can either place one knight in one of your regions, or expand one region by two spaces.

Herein lies the key to winning the game. Once you have regions up and running, if you have more knights in one of your regions than your neighbour has in his or her region, you can expand your region by 2 spaces (thus reducing your opponent's region by 2 spaces). If said spaces contain a town (and let's face it, that's pretty much what you'll be going for) then you gain a bonus 5 Power Points (plus 2 points for taking 2 spaces) and your opponent loses them.

The key to winning is when to do this. Do it too early and your opponent may be able to win the territory back later. Do it late enough, and it could well win you the game.

Continuing with the actions, and on top of the first card in the picture above you'll see a crown and sceptre. This signifies a politics action. Basically you get to choose one of the two piles of shuffled face down politics card, rummage through it, and take the card you want (though in our game, Bernd (who was the owner of the game and thus responsible for keeping we new players (fresh princes?) in the loop rules wise (especially as the rules were in German), and who shall now be dubbed "Bernd the Forgetful") forgot we got to look through the piles, so we just got pot luck with whatever card was on top of our chosen pile - oops!).

Politics cards give you various benefits during the game, like forcing an alliance between one of your regions and one of its neighbours, or giving you extra power points at the end of the game, or allowing you to steal a night from a neighbour and add one of your own, or just give you a nice weighty sack of ducats.

Back to the action types, and you may have noticed that along with the single sword and shield, there is an action with two swords and shields.

This action means you have a choice: either add 2 knights to the board, or add 1 knight and expand 1 region.

As both of these spaces contained towns, she picked up a total of 12 Power Points, with Bernd the Forgetful and I both losing 6. Ultimately it made little difference to me as I was dead last anyway, but it was enough for The Giggling One to jump ahead of both Ian and Bernd the Forgetful.

When the "The King is dead!" was the next card drawn the game was over. The Giggling One pulled 3 more points ahead with a parchment card she picked up earlier for a total of 56 points, 4 ahead of Bernd the Forgetful and Ian on 52. Even with the 5 point parchment I held at the end, I could only muster a measly 43 points. Boo.

Here's how the board looked at the end of the game. The Giggling One was, appropriately, rose; I was gold; Ian was grey; and Bernd the Forgetful was purple. 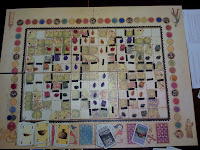 Löwenherz was a fun game, even if I found it very difficult to form a coherent strategy. I think playing the correct rule with the politics cards would make a difference to how the game plays out, so (and I know I say this with pretty much every game I play) I'd like to give this one another go. If only for the sharp swords and pointy lances.