I was in two minds over Power Grid before I played it, having heard some negative reviews from certain game afficianados, while also taking into account that it was the number two ranked game on Board Game Geek for a reason. At least it was number two, but it's slipped one spot (as has the former number one Puerto Rico) after the rise and rise of Agricola - a game more eagerly anticipated and hyped in the board game community than the 7th Harry Potter novel was by children, book stores and Giggling Ones everywhere. My doubt wasn't helped when Bernd said he'd played it before and wasn't keen. Still, we gave it a crack and came away thinking...well read on and see!

I've owned Power Grid since July when I purchased it in a great little bundle from GatePlay.com but last night at HoGS was the first time it's been on the table.

OK, now that I've set a record for the number of links in the first two paragraphs, it's time to look at what went down, or was powered up, last night.

The first thing you notice about the game when you pull out the board is that it is double-sided. One side is a map of Germany while the other shows the USA. We - that is Bernd, Ian and I - decided to play our 3 player game on the German map.

Incidentally, there are also expansion boards you can buy with Italy/France, Benelux/Central Europe, or Korea/China, not to mention a few custom made boards of other locations made by fans if you go hunting on BGG.

Let's take a gander at the German board (you might want to click the picture for a closer look)... 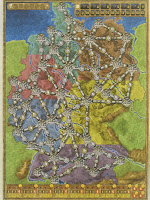 The board (as with the USA map) is divided into 6 regions. The reason for the divide is that you only play with the same number of regions as players. We chose to play with the three central regions coloured red, blue and yellow.

Each region contains seven cities, meaning a total of 21 cities were available to play on in our game. With the game ending when one player reaches 17 cities, this might seem a little too crowded, but up to three players can build in each city - quite handy when there were only three of us playing.

The object of the game is to build a "house" of your colour in the cities of your choice, and then power those cities using power plants that you buy along the way.

This is where strategy kicks in, because placement is important. After you've built in your first city (for 10 Elektro remember) your next city must be connected to that first one. And if you look at the map again, you'll see that there are connection costs that have to be paid to connect most cities. For example, if you've built in Essen and you want to build in Dortmund, it'll cost you 4 Elektro for the connection plus the 10 Elektro to build in the city, meaning you'll fork out 14 Elektro altogether.

Dortmund was my first placement of the game, with Bernd having taken Essen. This is where I screwed myself in the early part of the game. As Bernd was building first for the initial few turns, he took the cheapest connections, while I was limited to the next best. Ian, on the other hand, having been shut out of the cheap zone, took Fulda in the yellow zone and branched north, south and west, effectively cutting Bernd and I off from expanding.

You don't have to build in two adjacent cities. You can skip cities in between as long as you pay the total connection cost between them. So with Ian blocking us from adjacent cities, the only way Bernd or I could expand was to pay at least two connection costs to get to a city on the other side of Ian.

Of course we couldn't afford this to start with, so I was stuck with four cities, Bernd with five, and Ian with six. Of course Ian wasn't really stuck, but it served his purpose not to expand to seven cities, because this would have allowed Bernd and myself to build in each other's cities. This is what's known in Power Grid lingo as the "Step 2 stall" (Step 2 being the stage of the game where the maximum number of players allowed to build in each city is two). As the amount of money you get each turn is dependendent upon how many cities you can power, and I had the last cities, I was earning the least amount of cash each turn and falling further behind.

Now one might be tempted to ask how this whole powering of cities thing works. Assuming you've given in to temptation, here's the deal:

Each turn, players take it in turns to auction a power plant from the power plant market. Basically, four power plants are always on offer (pedants take note that, yes, this increases to six power plants in Step 3) and players can bid on a maximum of one power plant each turn.

As the game goes on, better and more efficent (and more expensive) power plants come into play. Let's take a butcher's shall we?

Here we can see six examples of power plants. The number on the top left indicates the value of the plant. This is the minimum amount of Elektro that can be bid for that plant, and gives a good indication of how good it is; the larger the number, the better the power plant.

Along the bottom of each card are the resources required to power that plant, and the number of cities you can power. Number 4 is a coal power plant. You need to burn 2 units of coal to power 1 city. Number 7 allows you to burn 3 units of oil to power 2 cities. Number 13 is a wind turbine and, handily, allows you to power 1 city for no resource cost.

In the mid-range you have the Number 23 power plant which uses 1 unit of uranium to power 3 cities. At the upper end of the scale you have Number 30 which uses 3 units of garbage to power 6 cities, and Number 46 which, being a hybrid, gives you the choice of using 3 units of either oil or coal (or 2 of one and 1 of the other) to power 7 cities.

As fate would have it, those six examples show all types of power plants available: coal, oil, garbage, uranium, hybrid coal/oil, and "free" energy (wind or fusion).

Requiring resources to burn in most plants means there must be some way of getting your electric little hands on the stuff. And so there is. 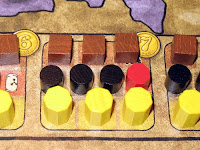 The above snapshot is of the "7 Elektro" section of the resource market. Each unit on this section costs 7 Elektro to purchase. Of course, you're only going to want to pay 7 Elektro for something if the cheaper stuff has already been snapped up.

So now you should have a basic idea of the how the game works. You buy power plants (you can have a maximum of three), buy resources to use with those plants (a set number of resources are replenished in the resource market at the end of each turn), build in cities on the map, then burn your resources to power your cities.

So it's a happy circle of growth, but how does the game end?

Well, the game ends when, at the end of the building phase, at least one player has built in 17 cities. At that point, all players then power as many cities as they can with their current power plants and resources. Whoever powers the most cities wins. This may not necessarily be the player with the most cities.

In our game, with my lousy start it appeared to be a two horse race between Bernd and Ian. Bernd took a solid lead in the mid game after he eschewed fossil fuels for wind, and was able to power 10 cities simply with the power of wind.

Towards the end, as we started vying for the best power plants, I started to catch up. I'd been the only one using coal and oil for a few turns, and as a result was picking it up very cheaply. As no one had been using garbage since the start of the game, it also became very cheap, and after I picked up the best garbage power plant (and three units of garbage for the whopping total of 4 Elektro) I had the capacity to power 18 cities.

Ian also had the capacity to power 18 cities, but didn't have the cash to build in that many cities before Bernd or myself. Bernd had more cash than he knew what to do with, but his power plants could only power 17 cities.

So, with my carefully managed savings (actually there wasn't that much planning involved), on the final turn I rose from the dead and trumped the other two by building no fewer than six more houses to take my total from 12 to 18 cities, thus forcing the end of the game. Bernd could have built more cities than me, but as he could only power 17, that was the end of the game and I was victorious.

'Twas a good game, with three strong strategic players who all had an enjoyable time. I do believe Bernd's view of the game was turned around, and first time players Ian and myself both came away with a positive view of Power Grid.

Next time (and that is the true joy and desire of a gamer: for there always to be a next time) I'd like to see how Power Grid goes with more players. I imagine a six player game will be a substantially different beast with increased competition for power plants and resources. Can't wait.