It's good to be a gamer at Christmas. You get what you want, and it makes it easier for people to find something for you. Unless of course, they know you are a gamer but not your game preferences and you end up with a bit of a dud. Of course, I cannot confirm or deny whether or not any games I received were duds. I'll let you be the judge, but I did pretty darn well.

We'll start with my wish list. Two months ago I posted about what was on my gaming radar as far as games I'd be happy to be the proud recipient of. I scored three out of the six games that were on that list, so that's a pretty impressive hit rate: 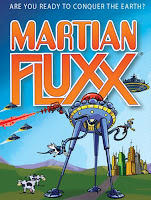 Additionally, my sisters chose to fuel my gaming habits with:

and Big Brother (this one doesn't have an entry on Geekdō, so I've now submitted one :-) ).

Finally, there was my and the Giggling One's gift to ourselves: Magic: The Gathering (Magic 2010 edition).

We've already played Martian Fluxx, Dice Town, and Magic. I'll do my best to post reviews in the near (read "distant") future. With any luck, the other games on my wish list may come my way by my birthday in February (hint hint).