With the somewhat lengthy period of time since my last update, I'd like to say I've been laid low by H1N1, but I'd just be telling porkies. Instead, I'll offer this excuse: I'm just lazy. Anyway, let's forget that and get on with the latest Up the vacuum thingy review: Pandemic.

One wonders if, upon the worldwide spread of the H1N1 virus that the publishers of Pandemic just had a wee moment of guilty pleasure. I like to think so anyway.

So let's see. Just what exactly is Pandemic and how do you fight it? Well slow down there soldier...or doctor...because you're not going into this alone. You see, we've got your back.

Pandemic is one of what seems to be a growing trend of cooperative games. Sure, co-op games have been around for many years, but with big name titles like Ghost Stories and Pandemic, which was nominated for the 2009 Spiel des Jahres, co-op games are all the rage with the hip gamers.

And I'm nothing if not a hip gamer.

Or is that a geek gamer? Yes, definitely geek.

The object of Pandemic is for the players to run around a board...

...trying to stop four different diseases (in the form of ubiquitous cubes) from running rampant, and ultimately, hopefully cure them.

The problem is that at the end of every turn, more disease cubes are added to the board. Where the outbreaks occur is dependent upon which Infection Cards are drawn. 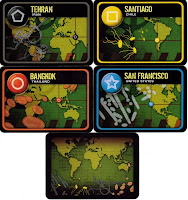 Each disease originates in a particular part of the world easily discernible by the colour coded board. For example, if the Tehran and Santiago cards, as seen in the picture above, were drawn from the deck then a black cube would be placed in Tehran and a yellow cube in Santiago.

This doesn't stop the colours from spreading to cities of another colour, as any time you would be required to add a cube to a city, and there are already three cubes of that colour in that city, the dreaded outbreak occurs [insert ominous music here].

During an outbreak, one cube of the outbreaking colour must be added to each adjoining city. If you're really unlucky, or just suck at the game, this can have a domino effect if an adjoining city also outbreaks because of this. If you ever hit your eighth outbreak, then it's game over, and not in a good way. You lose.

But wait, that's not all. For the special price of one Epidemic Card things can get a whole lot nastier.

Squirrelled away in the Player Deck (I'll get to that later) are a number of Epidemic Cards. The more you have, the harder the game becomes. Four Epidemics are for beginners or cowards, five cards are for a "normal" game, and six cards are for the "heroic" game. And if that's just not enough, the Pandemic expansion, subtitled On the Brink, actually let's you add a seventh Epidemic for a difficulty level they call "Legendary" and I call "Death Wish".

If you draw one of these bad boys, you have to draw an Infection Card from the bottom of the deck (representing a city that has not been diseased before) and place three cubes of the appropriate colour in that city. Then you shuffle all the Infection Cards in the discard pile (ie. the cities you've already had to put cubes in) and place them back on top of the Infection Card deck. Meaning that the next time you have to draw cards, you're going to be drawing cards you've previously drawn, thus increasing the rate of infection. Ooh, that's dastardly. And clever. I'll pay that one.

By now you're probably wondering how you actually stop the scourge from infecting every darn city in the world and turning everyone into little cubes. Either that, or you followed the link at the start of the review and found out for yourself. Shame on you if you even considered it.

As I mentioned earlier, you get to run around the board doing stuff. Like removing cubes, building research stations and discovering cures. But first, before all of that begins each player is given a special role. 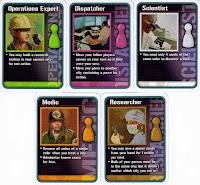 Each role has special abilities. For instance the Dispatcher can move other players' pawns about, and the Medic can remove all cubes of a single colour in a city with just one action (for everyone else it's one action per cube removed).

The special abilities are really where it's at. Utilising these effectively is the key to doing well. In a recent game, I was the Medic, The Giggling One was the Dispatcher, and Mark was the Researcher. On successive turns, The Giggling One flew us all to the same city and used a Special Event card to build a research station there for free, Mark gave me all his cards of one colour, and I cured the disease and then removed all the cubes in that city for free. Sweet.

With each player having four actions available to them each turn, there is a lot of discussion on how to use them. For one action you can move to an adjoining city (or a non-adjoining city if you have the right Player Card in you hand or you're flying from one research station to another), remove one cube from the city you are in, build a research station in your current city (if you have that city's card in your hand), pass a card matching the city you are in to another player in the same city, or cure a disease.

Curing diseases is rather important, because that's the only way you can win the game. You first need to get yourself to a city with a research station, and then discard five cards of the same colour in order to cure the disease of that colour.

Cure all four diseases and you win the game. Hit eight outbreaks, run out of cubes of one colour, or run out of Player Cards and you lose.

Speaking of which, I haven't really explained Player Cards yet have I? I'd better to that now then I suppose. 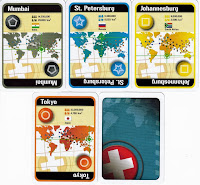 Player Cards, like Infection Cards, simply depict a city on them. There is one card for each city on the board. Each player starts with some Player Cards and then draws more during each turn after they've taken their four actions.

Player Cards are used primarily to cure diseases, but also as a means of quickly travelling around the board and to build research stations. Once a Player Card is used, it is placed on the discard pile and is not used again. So you always need to think twice before using a card. You may desire to travel to a red city in one action, but if that leaves you short of red cards for a cure then you could be in trouble.

Mixed in with the Player Cards, along with the evil Epidemic Cards, you'll also come across Special Events that give you a free leg up. 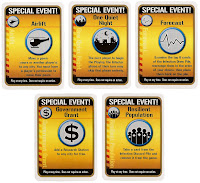 Pandemic is a lot of fun to play, and I especially enjoy teaming up with people rather than pitting my wits against them. I've played the game three times so far for two wins and one defeat. Take that you insidious diseases!

The first game I played was a two player game with The Giggling One. We played with four Epidemic cards to ease ourselves into the game, and were almost beaten. 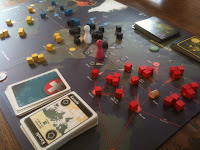 As you can see, we very nearly ran out of red cubes with all the infections in Asia. We also fought a losing battle to eradicate yellow and then blue, but we managed to find the fourth cure after hitting the third epidemic and only suffering six outbreaks.

The second game was a three player affair with The Giggling One and Mark, and was pretty much a non contest. We played with five epidemics, and the blue disease simply ran rife. We cured yellow early, but the rest of the game was spent in a futile effort to contain the spread of blue. We ran out of blue cubes just after the third epidemic and lost the game.

The third Epidemic Card didn't even get a chance to come out in the third game. Again with The Giggling One and Mark in a five epidemic game, we fought the diseases as best we could. And this time it was a walk in the park. Only one outbreak occurred by the time we cured the fourth disease.

Which brings me to my final comment. There is a large degree of luck involved with Pandemic. The order the cards come out in is a huge factor. To have played two three-player games with five epidemics, and get slaughtered in one and coast home in the other shows that perhaps the game is a little too luck heavy. Or we just played so much better the second time.

Regardless of the luck factor, Pandemic is still a very enjoyable game, and worthy of the accolades it has achieved. It's currently ranked at number 24 on Board Game Geek which is no small feat. Highly recommended if you'd like to join forces with other players and rid the world of little coloured cubes.