Review: Are You the Traitor?

It’s been some time (read: ages) since I wrote a review, so it’s time to remedy that with a review of Looney Labs’ Are You the Traitor?

I’m a big fan of Werewolf, and I particularly enjoy moderating games. Of course, being a moderator means not participating in the game as a “player”, so it’s good to be one of the villagers every now and then.

One of the other “issues” with Werewolf is that once you’re night time fodder for the werewolves, or a victim of the noose during a day phase, your participation in the game is over and you have to watch the rest of the game play out from the sidelines (although this can have its own voyeuristic fun).

If you are one of those people who doesn’t like that aspect of Werewolf, then Are You the Traitor? could be the game for you. It features similar secret roles and a good team and an evil team, but everyone plays at all times, and everyone can change roles multiple times throughout the game. It does, however, max out at 10 players, but can be played with as few as 4.

OK, that’s enough of the lycanthropic comparisons for now. Here’s what you get in a game of Are You The Traitor?: 56 cards.

The cards themselves come in three types: Character, Wizard Alignment, and Treasure cards.

At the start of each round, the character cards are shuffled and each player receives one card face-down. You can end up as one of four characters: The Key Holder, a Guard, a Wizard, or the eponymous Traitor (insert evil organ music here).

The number of each type of character is determined by the number of players. For example with four players, there will be one of each character, but with 10 players, the split is: 1 Key Holder (there is only ever 1 Key Holder), 2 Traitors (double the trouble), 3 Wizards (triple the wizardry1), and 4 Guards (quadruple the, er, guardiness).

The Key Holder and Guards are on the side of goodness while the Traitor is, as one would suspect, captain of the evil team (note: there are no actual captains, but given the title of the game, anyone playing a Traitor has a right to a certain degree of cockiness).

That leaves the Wizards. These guys can be good or evil. That’s where the Wizard Alignment cards come in. 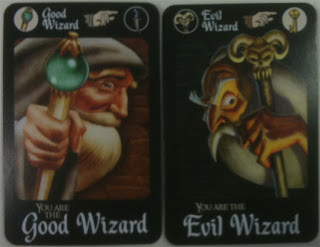 Anyone who is a Wizard must reveal his or her Character card. They are then given an Alignment card which must be kept secret. In any game with two Wizards, one will be good and one will be evil. Things get more interesting in a 9 or 10 player game when there are three Wizards. At least one is Good and one is Evil, but no one knows what the actual Good/Evil split is.

Now the Key Holder, while quite an important role, doesn’t get to remain as secret as he or she may wish. If there at least 6 players, then everyone except the Wizards gets to know who the Key Holder is. So it’s ye-olde-close-yon-eyes-thou-casters-of-magic-while-yonder-Key-Holder-makes-it-known-the-Evil-Magic-Key-is-in-his-or-her-possession time.

After that it’s a free-for-all with unstructured conversation between all players. Everyone tries to figure out who everyone else is with suspicions flying left, right and centre. Who looks shifty? Which of the Wizards is good and which is evil? Who are the dastardly Traitors?

This can go on for some time or be over very quickly. The round ends when one player points to another player and cries “Stop!”

Why would they do this? Well, the thing is each player has a job to do. Everyone except the Traitor(s) has a target they are trying to identify:
Posted by Jeremy at 7:38 PM