Kingsbridge, England, 1337. It has been 200 years since Prior Philip’s cathedral was built. The cathedral still dominates the town, but now the monastery has been joined by a convent, and wool has become the major commodity traded at the market. This is World Without End. 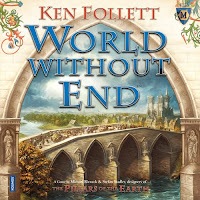 If you’ve read Ken Follett’s novel on which the game is based, playing this game may well mean more to you, but that doesn’t mean it’s not an enjoyable strategy game if you haven’t read the book. Because it is. The fact that it won the 2010 Spiel des Jahres Plus award is more than enough reason to check out this game. But seriously, read the book anyway. Ken Follett is a brilliant wordsmith and both The Pillars of the Earth and World Without End are fantastic reads.

In World Without End - I was about to start abbreviating the game as “WWE”, but I kept picturing big beefy blokes throwing each other around a ring, so I think I’ll stick with the full name – players earn victory points by undertaking various tasks around Kingsbridge. Rather than place workers on the board to signify what you want to do, each player instead has action cards. In the six rounds of each of the game's four chapters (yes, that’s 24 rounds all up but don’t worry – it’s not excessively long), you are allowed to choose 1 action per round from your 12 available actions. Everyone has the same 12 actions, so there’s no blocking another player from taking a particular action by getting in first. Of course, you can always make one action less desirable for another player if you jump in and grab that last wheat token or complete the building project they had their eye on.

But I’m getting ahead of myself. Let’s do this by the book and start by having a gander at the board.

It’s pretty isn’t it? Michael Menzel has done a fantastic job with World Without End. Around the outside of the board is the ubiquitous victory point track. Down the left side of the board are the field, quarry, and forest where the wheat, stone, and wood tokens are placed. A smattering of houses surrounds the wool market in the centre of town, along with various other buildings including the famous cathedral. The bottom left of the board depicts Leper Island where you will be able to build your own houses during the game. Finally, there’s a favour track forming an arch in the bottom centre of the board.

A sizable amount of extra stuff also comes with the game.

While stone and wood come in the ever-popular cube motif, the wheat actually looks somewhat wheaty which is nice. Wool and cloth are, erm, curvy, carpety shaped. Other (not pictured) "resources",for want of a better term, are represented by cardboard tokens. These include medical knowledge, piety, and loyalty. 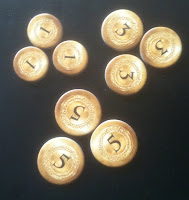 For those interested in accumulating a little wealth, gold coins are also provided in three denominations. 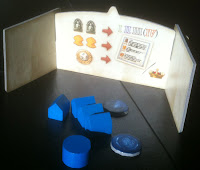 Each player also gets their own supply of 4 houses, 2 donation seals, a scoring token, and most importantly, a nifty screen to hide stuff behind. Handily, the screen also has a picture to keep you amused and to remind you of the mandatory duties you must pay at the end of each chapter. 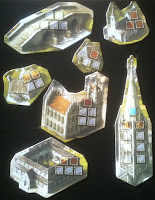 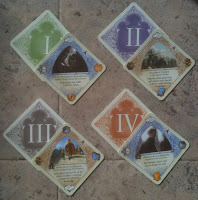 Speaking of event cards, each round starts with the topmost event card being drawn by the starting player for the round (the player who starts the game is the last player who built something, so if you want to go first in round 1, you may want to knock something together before you play). There are actually 11 event cards per chapter, but with only 6 rounds per chapter, 5 cards from each chapter won't be used.

If you have a glance at the picture above, you'll see that event cards come in two exotic colours: red and blue. Red means the event is one-off and immediate (you do what it says straight away). For example, the event card for Chapter III shown above reads "Each player receives his or her choice of either 1 wood or 1 stone or 1 medical knowledge." Blue cards, however, mean the event is long-term, and will generally last until the end of the current chapter. These events are not taken into account until the action card phase of each round (we're coming to that).

You may also have noticed that each event card also happens to have a picture of a resource in each corner. After resolving the event (if necessary), the current player gets to orient the card in any one of four ways. Each player then gets the resource that is facing them (it therefore helps if players are seated along each edge of the board). So yay, a free resource for everyone.

But the event card fun doesn't end there, oh no. Also depicted on each card is a little red arrow along one edge. The current player must also take this into account, for whichever direction the arrow ends up pointing then determines how the marker on the favour track moves (from 0 to 3 spaces). If the marker moves then the current player gets their own little benefit dependent upon the space it lands on. Bonuses like VPs, piety, wool, or wheat are available. Alternatively you could end up losing money to the outlaws. Funnily enough, most players tend to avoid that outcome.

Alrighty, so now everyone's got some resources, and the current player hopefully has a bonus. This means it's time to move on to the action card phase.

There are 12 action cards in total, and all players get exactly the same set of cards. Each turn you get to play one of your actions. These let you do things like gain grain, wood, stone, or piety, or build a house on Leper Island, or contribute resources to a building project. Each building project, by the way has its own little spot on the board so it seamlessly blends in with the rest of the artwork. Nice.

All of these actions have their perks, particularly the building project one as you can gain 3 VPs per wood or stone you place on a building. In the third and fourth chapters, the Medicine action can come in handy as you can gain stuff by curing residents of Kingsbridge of the plague. Each action card can only be played once per chapter, so some degree of planning helps.

Another tricky thing the designers have put into the rules in the action phase is a cunning little mechanic called discarding. You see, every time you choose one of your action cards to play, you must discard another card from your hand. This discarded action will not become available until the next chapter. This makes planning ahead even more vital, because if you find you want to play an action you've already discarded, then too bad. Of course, if you're not quite sure what you're doing, then planning can be difficult. So good luck with that, then.

I mentioned the plague earlier. The plague is a central theme of the novel, and it also plays a role in the board game. After the end of Chapter II, the houses in Kingsbridge, along with the outlaws, may become infected. This is achieved in the game by randomly distributing the plague markers face down on each house.

Thereafter, in Chapters III and IV, each event card also has a house number on it. That house's plague token is turned face-up to see how many inhabitants are affected by the plague. If you wish to cure a house, and therefore gain a reward (generally 2 VPs plus a resource), you'll need to not only play the Medicine action card, but also have accumulated enough medical knowledge tokens equal to or greater than the number of infected inhabitants. The good news is you don't lose medical knowledge by using it, so you can go on to cure another house in the next chapter (or indeed the same chapter if you use the Privilege action that allows you to repeat your last action).

And so the game goes. Players gain resources and then use them to do stuff in order to gain VPs. Easy.

Yeah, I'm fibbing a bit. If accumulating and using resources was all there was to it, this game would be a lot simpler, and a darn sight less frustrating (in a good way), than it actually is.

And that's because of the dues. Just like Agricola, where you have to worry about feeding your family when each harvest comes around, in World Without End each player is required to pay dues to the king at the end of each chapter. And he's a right greedy bastard.

Every player must pay two piety, two wheat, and a gold tax equivalent to the roll of the tax die (a d6 with sides 2,3,3,4,4,5 just like the tax die in The Pillars of the Earth). Failure to cough up the required dues results in loss of Victory Points as well as an additional penalty applied in the next chapter. 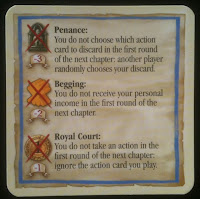 Not enough piety? Then it's penance for you miladdo. You don't get to choose your action card discard in the next round - someone else randomly chooses it for you. Ouch. At least you'll get an action in the next round, unless of course you can't pay your tax. Double ouch.

I found that ensuring you have the requisite resources to pay your dues is always in the back of your mind as each chapter goes on. That's not to say you can't do other things, because you can; it's just that it's a very delicate balance of accumulating a decent amount of resources, while avoiding those dreaded penalties. It can be quite difficult to play an entire game without once being penalised, especially when you only have control over the event card once or twice per chapter.

Frustrating though it may seem, and somewhat of a grind early on, World Without End is still a solid, enjoyable game. The mechanics are clever, and work in nicely with the novel. There is very little down time as everyone is involved in every round. There are just enough screw-your-opponent options in the game to be satisfying, but not game changing. And that's always a good thing.