"Caylus": not the most gripping of titles for a game. Despite this, Caylus has fought off plenty of more intriguing sounding games to hold on to the number 9 spot on the Board Game Geek rankings. And, you can even buy the t-shirt.

Caylus is one of those games for thinkers; one of those games where the term "analysis paralysis" is particularly apt. It presents you with choices - limited at first but increasing as the game goes on - that lead to a frustrating want-to-do-everything-but-can't-afford-to-and-if-I-don't-do-that-then-someone-else-will-and-it's-just-not-fair-damnit.

Ultimately, your goal is to earn more prestige points (effectively victory points) than anyone else. You do this by accumulating resources and then using those resources to build buildings and/or build part of a castle. Of course, everyone else is trying to do the same thing, and once that castle is built it's game over and you hope you've done enough to win.

Of course, to do all of this, we need a pretty board to play on. Here's one I prepared earlier: 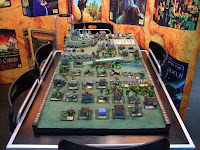 What? That monster? Wait, no. That's the Essen ye-olde-gigantic-3D-rific version. Here's what we peasants play on:

As you can see we've got a kick-arse castle at the top, and a path that leads down through a village, and across a bridge, before winding gracefully down through lush green pastures.

As the game progresses, those empty squares will be filled with buildings. The first six after the bridge are filled at the start of the game, with the remaining empty spaces filled during the game when players decide to build.

The buildings themselves give various benefits from producing resources (food, wood, stone, cloth or gold), to trading resources for money or vice versa, to allowing new types of buildings to be placed on the board.

Each building generally has a cost, a reward for building, and some sort of output (what you get from that building), though there are exceptions (aren't there always?).

Say you wanted to build a farm. That's the wooden building in the middle of the bottom row in the picture above. It will cost you one wood and one food to build (as indicated by the cubes in the top left of the tile), reward you with 2 prestige points (per the top right of the tile), and will produce either two food (mmm...pork) or one cloth when it is utilised.

Which leads, in a nice little segue, to a quick explanation of how buildings are utilised.

Each player has six workers. Taking it in turns, players place one worker at a time on a building. Most buildings can only have one worker on them. Once everyone has placed all the workers they wish to (there may not be enough buildings or you might not have enough money (placing workers costs money) to place all of your workers) then each building with a worker is resolved from the castle downwards and whoever placed their worker on a building gets the benefit from it.

Just because you built a building (you get to place a little house on the tile to signify you own it) doesn't mean other players can't place their worker there. In fact, it can be handy if they do, because every time another player uses one of your buildings you earn a prestige point. Not only that, but some buildings also reward the owner with resources if another player's worker is placed there. Sweet.

So far it's looking relatively straight forward right? You place workers on buildings - those buildings give you resources or money, or the right to buy another building. Of course, it's not that simple.

Firstly, the buildings between the castle and the bridge are special and have some, er, special benefits. In particular, the Stables allow you to change the order of play, which doesn't change otherwise. The Inn lets you place all your workers for 1 denier (the game's currency), even if you would have to pay more.

The Merchant's Guild lets you move the provost up and down the road.

The what? Pronounced "prov-uhst", the provost is a sneaky little bugger that players can move along the road in order to prevent other players from activating buildings. When it comes time to get the benefit from a building on which you've placed a worker, and that building is further away from the castle than the provost is, then bad luck - you ain't gettin' a sausage from that building. Ouch.

Another of the special buildings is the Joust Field. Placing a worker here gives you - for the cost of 1 denier and 1 cloth - a royal favour (or "favor" if you want to be true to the Americanised rules).

Favours are pretty darn handy in this game, and are another way to gain stuff. Gaining favours allows you to move a marker of your colour along one of the four favour tracks (the grid in the top right of the game board). Here's a close-up:

There are multiple ways to gain favours in Caylus, and you'll want to utilise them as best as possible. Each time you gain a favour, you can advance a token further along one of the favour tracks for a bigger and better reward.

The top favour track gives you bonus prestige points; the second track gives you deniers; the third gives you resources; while the fourth lets you buy buildings at reduced cost. All nice things to have.

After all the other workers have collected their goodies during a round, anyone who placed a worker in the castle can now build part of the castle. You do this by spending three resources (one food and two other resources) and placing a house of your colour in one of the spaces beneath the castle.

Not only are you rewarded with prestige points for giving a batch of your hard earned resources to the castle, but the more you give, the more favours you get.

It's certainly rewarding to spend resources this way, but with a limited amount of resources at your disposal, you need to decide whether it is better to invest those resources elsewhere, particularly by paying to place a building that will reward you with more points down the track.

So it comes down to those aforementioned analysis paralysis decisions...

"I can place my worker there, which will give me that resource, and I can then afford to build that stone building, but that means I'll have to place a worker over there as well, and someone else might go there, so do I go there first and hope someone doesn't take the resource I want, or do I take the resource first, or do I spend the resources at the castle instead and hope it's enough to gain a favour? Oh, and do I want to save some money in case I need to move the provost, or will I hope no one moves it? Also, I'd really like to go first next round, but if I go in the stables now I might not be able to get the gold that I need if I'm going to have enough for the prestige building later on."

If this is your thing, then go for it. Caylus is a lot of tactical fun, especially when you're playing with people of a similar disposition for this kind of game. I've played the game twice now: one 2-player and one 5-player game, and I'm starting to see the strategies involved and I'm most certainly intrigued to play again.

While I haven't covered every little nuance of the game (like scoring the castle sections and movement of the bailiff), I reckon you'd probably know whether this is your sort of game or not.

As for me, I definitely like it. It has a similar sort of feel to The Pillars of the Earth with worker placement choices, giving ample opportunity for experimentation with varying strategies.

The best laid plans can go awry with opponents' workers blocking or delaying your cunning plan, and it's the necessity to constantly adapt your strategy that I find so damn frustrating yet so enjoyable.

Get the right crowd, like this one, and it's a damn good game: 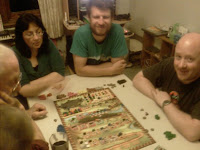